Air travel gets us where we need to go, but it can also make for a long, long day. As the amenities start to dwindle and the leg room gets smaller, it’s easy to get worn out and uncomfortable during a flight. In fact, our survey revealed that the average amount of time before people get uncomfortable on a flight is three hours. 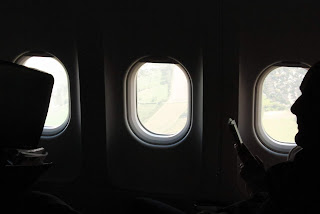 So, what do travelers do to combat this discomfort? In order to get more comfortable on a flight, many fliers will try adjusting their seat or using a travel pillow while others may kick off their shoes and socks. But is this socially acceptable? According to our survey, 64% said it’s OK to take their shoes off, and 20% said it’s OK to take your socks off to get more comfortable during a flight.

Lastly, we asked our survey to rank flying annoyances. Coming in at No. 1 with 54% of the vote was getting your seat kicked. A crying child followed seat kicking with 27% of the vote and body odor came in third with 26% of the vote. Other flying annoyances were a talkative passenger, inattentive parents, a drunk passenger, a seat pulled back or leaned on, snoring, rushing to get off the plane as soon as it gets to the gate, a reclining seat, a passenger putting their feet up, smelly food, man-spreading, a passenger removing their socks or shoes, bright screens on phones, non-service dogs, and finally in last place was dressing sloppy, which bothered just 1% of our survey.

Posted by Traveling Cynthia at 12:56 PM