The following news is particularly exciting to me as I was one of the first to walk the circular staircase of the newly opened Elbphilharmonie Hamburg concert hall, albeit wearing a hard hat and during its lengthy construction. This was in 2011. 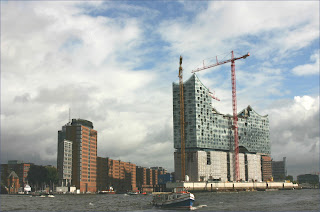 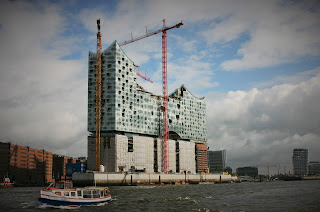 Photos by Cynthia Dial
Fast forward to 2016 and my how times have changed. Exactly one year before the scheduled opening of the Elbphilharmonie Hamburg, the opening act is set: the NDR Symphony Orchestra under the baton of Thomas Hengelbrock will be performing in the great hall on January 11 and 12, 2017. Located in the Hamburg harbor, the Elbphilharmonie was designed by Swiss architects Herzog & De Meuron.

The building’s curved glass construction is set on top of a historic cocoa warehouse. It perfectly combines traditional and modern design and boldly enhances Hamburg’s cityscape. Now in its final construction phase, the building has already become Hamburg’s new landmark, and is poised to be one of the most acclaimed concert halls in the world.

Posted by Traveling Cynthia at 10:50 AM