by Cynthia Dial for JustLuxe.com

A little backstory. Upon learning that the Wickaninnish Inn is known for storm watching, a visit during inclement weather became a goal. Thus, when my small plane departed from the city of Vancouver to Vancouver Island (setting of Tofino, home to the Wickaninnish Inn), and I learned that poor climate conditions mean landing in Qualicum Beach, followed by a two-and-a-half hour drive to Tofino, reality set in. My dream was coming true. 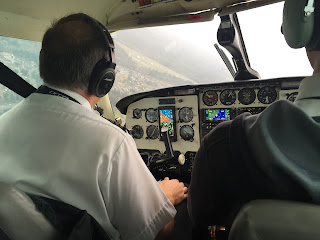 “Watch your head as you’re deplaning,” cautioned the Orca Airways pilot before humorously adding, “If you don’t watch your head, watch your language.” It is on that upbeat note that my journey began – driving along the Pacific Rim Highway, first through Cathedral Grove, then around Sproat and Kennedy Lakes in rain and eventually over Sutton Pass through snow. My weather-tested arrival to Vancouver Island’s most remote patch on its west coast would be considered challenging by most. To me, it was exhilarating. 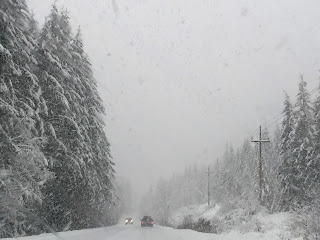 Originally a fishing village, today’s Tofino is outgoing, easygoing, enterprising and, in many ways, exclusive. Situated in the environs of the Clayoquot Sound UNESCO Biosphere Reserve, it is the setting of an array of activities – from hiking, fishing and surfing (named North America’s best by Outside Magazine) to whale watching, bear watching and bird watching – and from November through February, for storm watching. 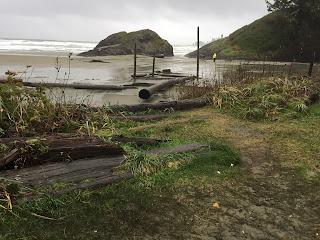 At first glance, the town was not impressive. Yet, closer inspection unveils an at-the-end-of-the-road place (it’s the conclusion of Canada’s cross-country east to west Pacific Rim Highway) that is cozy, charming and casual. 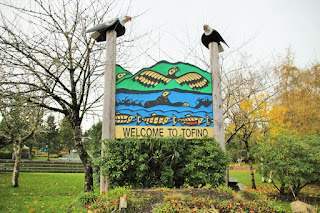 Its array of eateries includes Wolf in the Fog (named Canada’s Best New Restaurant in 2014 by Air Canada’s inflight magazine, enRoute), award-winning SoBo (aka Sophisticated Bohemian) and Tacofino (a food truck renowned for its fish tacos and chocolate diablo cookies). The place to be on Wednesday nights is Jack’s Waterfront Pub for karaoke, a visit to Tofino Brewing Company should be mandatory (among its most popular draughts is Blonde) and Eagle Aerie Gallery is best known for the work of Canadian artist Roy Henry Vickers. 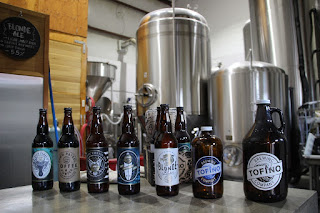 For me, however, Tofino’s primary appeal was found not in its pastimes or at dinnertime, but three miles from the village center at the Wickaninnish Inn. Comprised of two contemporary cedar, stone and glass structures – the Pointe Building and the Beach Building – the Inn is comfortably situated on a rocky point overlooking the Pacific Ocean and Chesterman Beach (at 1.5 miles, it is Tofino’s longest strand). 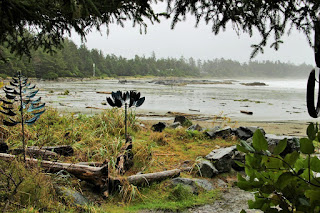 My arrival was beneath sheets of rain. Running the length of its porte cochere toward the oversized Henry Nolla-carved yellow cedar double doors (treasured creations of the late resident craftsman), my warm lobby welcome was from a blazing fireplace, flanked by floor-to-ceiling windows showcasing the churning sea.

It was this initial introduction to the Inn’s National Geographic-like setting and its meticulous attention to detail that ensured this fact: I might never leave. If “love is in the details,” as Oprah is known for saying, the Wickaninnish is a valentine. 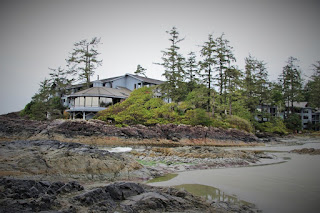 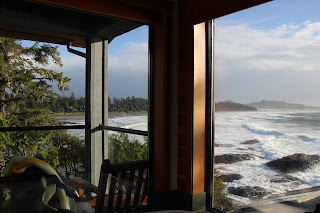 “Rustic elegance on nature’s edge,” describes managing director Charles McDiarmid (eldest son of the Inn’s founding father, the late Howard McDiarmid) of his family’s loving creation. Hands-on from the beginning, McDiarmid recounted the Inn’s construction. “First we had to blast rock, clear the site and build the road, then run the sewer, water and cable lines.” Charles and his brother Bruce physically cleared the site. “I remember September 26, 1995, because it was the first day we were hauling stuff in rather than hauling stuff out. Launching less than a year later, it was August 9, 1996, when I took off the hard hat, put on a clean shirt and opened the doors,” says McDiarmid, a Cornell School of Hotel Administration graduate and Four Seasons Hotel veteran.

The Inn’s reception to the world’s hotel scene was simply one accolade after another. Only one year after opening, it received the Relais & Chateaux designation (typically a three-year pursuit) and in 2002 the Wickaninnish was named Travel + Leisure’s top North American hotel and the world’s third. 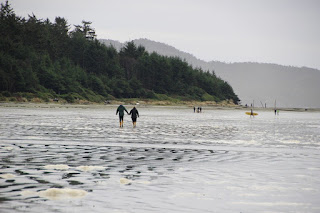 A walk about the Inn is akin to visiting a museum or gallery, meandering amongst First Nations artwork, burl wood furniture, locally created metalwork accents and even first editions of Captain Vancouver’s “Voyage of Discovery.”

You’ll know you’re approaching the Ancient Cedars Spa by its aroma. Among its enticements are the spa’s two couple-treatment rooms (Rainforest Haven and Cedar Sanctuary), whose doors open to the privacy of the sea. The spa’s treatments shout “Pacific Northwest” with such indigenous components as Vancouver Island seaweed body polish and seaweed salts for its hydrotherapy soak amid 144 water jets. 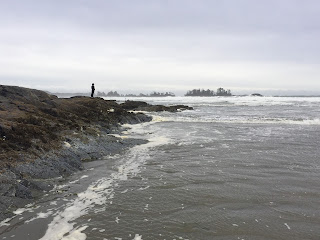 Additionally adding to the luxurious Inn’s appeal is The Pointe Restaurant, which showcases a 240-degree view and serves up Chef Warren Barr’s specialties that feature locally sourced, West Coast-inspired, fresh-from-the-sea cuisine. Chef’s not-to-be-missed weekly tasting menu – five or six courses, paired with wines – offers such dishes as ginger cured foie gras with local strawberry preserves and almond crusted Tofino lingcod. A copper fireplace occupies the center of the room, with premium seating near the warmth of this centerpiece or at one of the many tables perched window side. To avoid disappointment, however, be sure to make reservations well in advance. 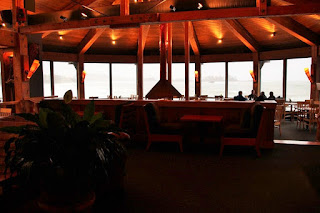 Another dining option is the more casual Driftwood Café. Frequented by locals, “It’s our gateway drug,” says McDiarmid. Though smaller, it too is window-lined and it too frames a premier view. Situated around an impressive bar whose base is carved from a fallen tree, a wood-burning stone fireplace and at the entrance of the Inn’s art gallery, it features a menu that isn’t as broad but from which I experience an all-time favorites meal – West Pacific smoked salmon, paired with a glass of Blue Mountain Brut. 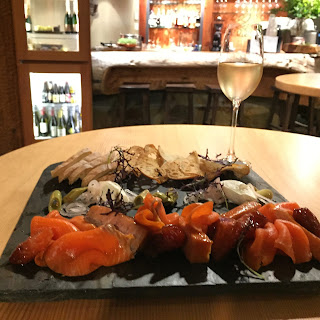 A year-round destination, in truth there is no “best” season for Tofino and the Wickaninnish Inn. Summer serves up Dungeness crab cookouts on the beach, wintertime can mean storm watching and surfing, hiking and wildlife viewing can be enjoyed almost anytime. 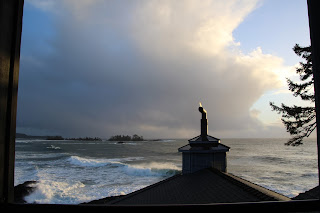 Photos by Cynthia Dial
At departure in Orca’s eight-seater commuter plane the skies are clear, setting the stage for an all-together different but equally enticing experience. Another day, another Tofino. The Inn’s door signage most simply described my luxuriating visit: “Watching the waves from my window. Please come back later.”